The beautiful sandstone ridge that overlooks central Liverpool and the Mersey from Everton Park is a place to contemplate.  There can hardly be a city district on earth that has experienced such intense waves of change, time and again, hammering the cliff face into unrecognisably different shapes. 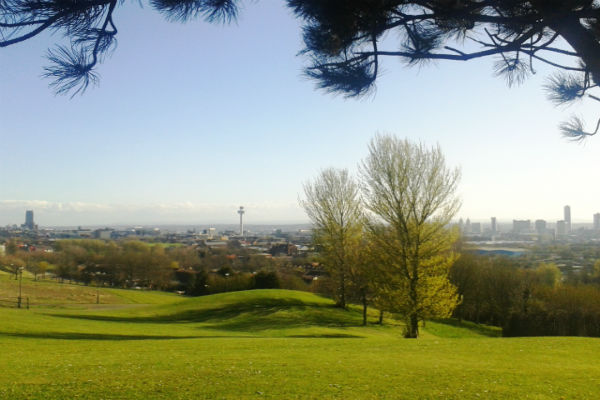 Liverpool’s skyline from Everton Park on Mayday, 2013.  This area once housed a district of 60,000 people, and was densely developed all the way down to the River Mersey.  Pic: Share the City

These waves of change began around three centuries ago, and accelerated in intensity, violently reshaping the ridge until suddenly becalmed.  Now a new transformation is promised, much more gentle than previous upheavals, but still radical in its way. 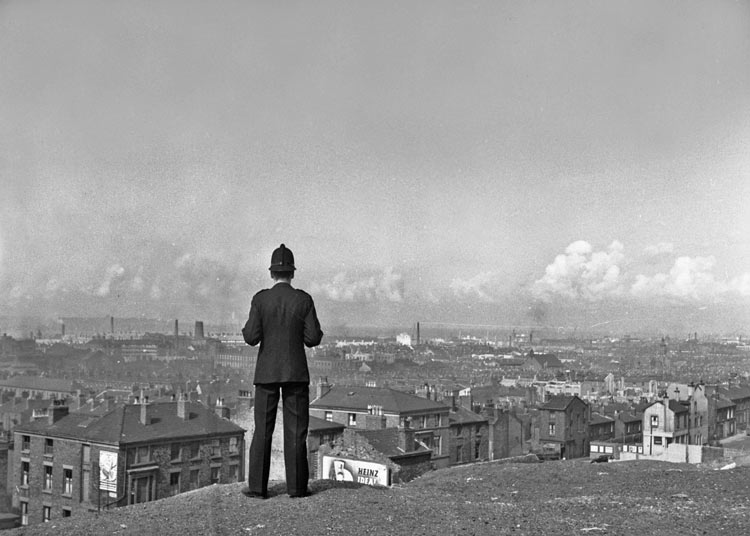 Karl Hughes’ superlative early 60s photograph from Everton Terrace. The clearance of Scotland Road was about to commence. St. Anthony’s Church is hidden behind the policeman. The factory chimneys show the line of the Leeds & Liverpool Canal. Pic: Courtesy of Streets of Liverpool, Bluecoat Press, Fotolore.  Sharethecity.org

Local practices Austin:Smith-Lord, Broadway Malyan, Studio Three, Cass Associates and Union North offshoot FVMA with shedkm were invited to vie for the £1.8 million project and presented their initial proposals to residents and ‘stakeholders’.  The firms were asked to draw up proposals for ‘a meeting place and operational hub’ housing a café, information centre and gallery.

Richard Tracey from project backer Liverpool Vision told the AJ: ‘Everton Park is one of the city’s precious green lungs, but it has been underused in the past.  This is all about to change.  We are creating a vibrant and fun visitor destination – in the same way that Barcelona’s Parc Guell is.’ 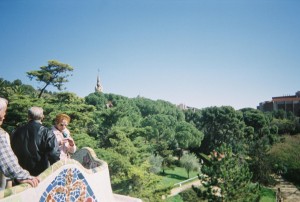 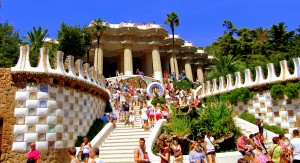 The staircase and Colonnade at Parc Guell, Barcelona. Pic: Wikipedia 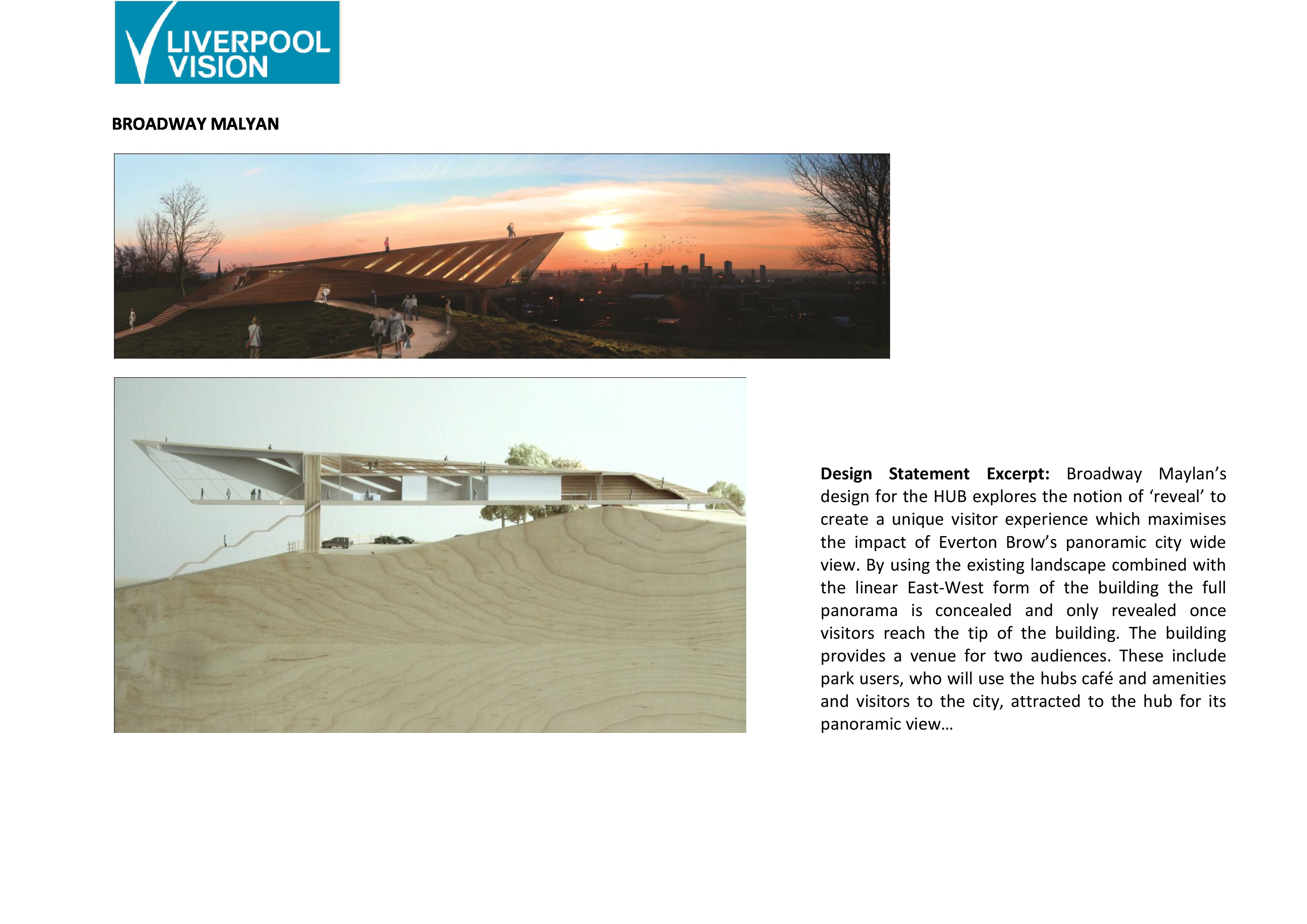 Broadway Malayan’s design for Liverpool’s new landmark pavilion (above) was given preferred status in March.  The other four shortlisted concepts are shown below (in no particular order): 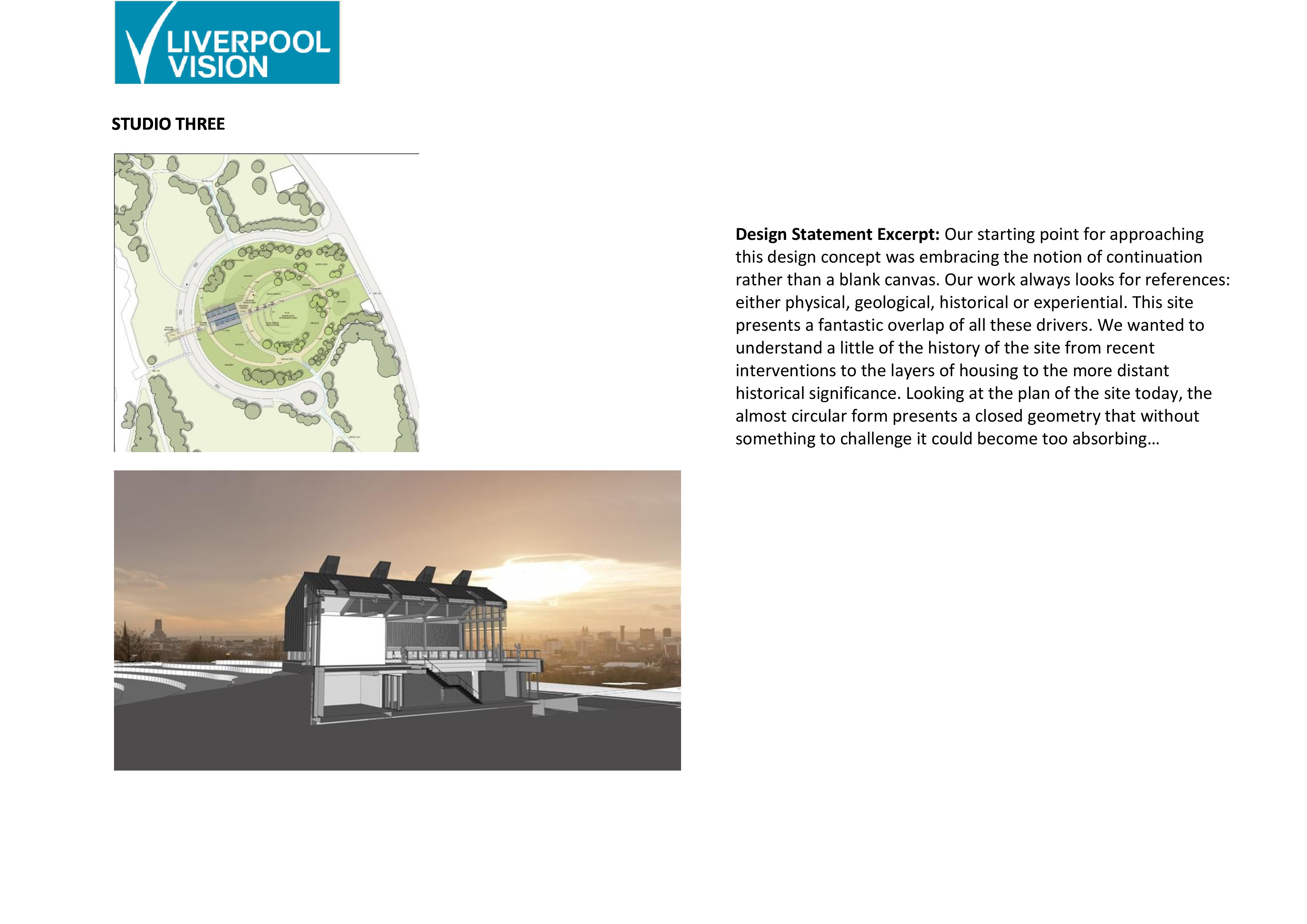 Everton Park Pavilion: Home is where the Park is – Studio Three’s shortlisted design evokes the terraced streets that once stood here. 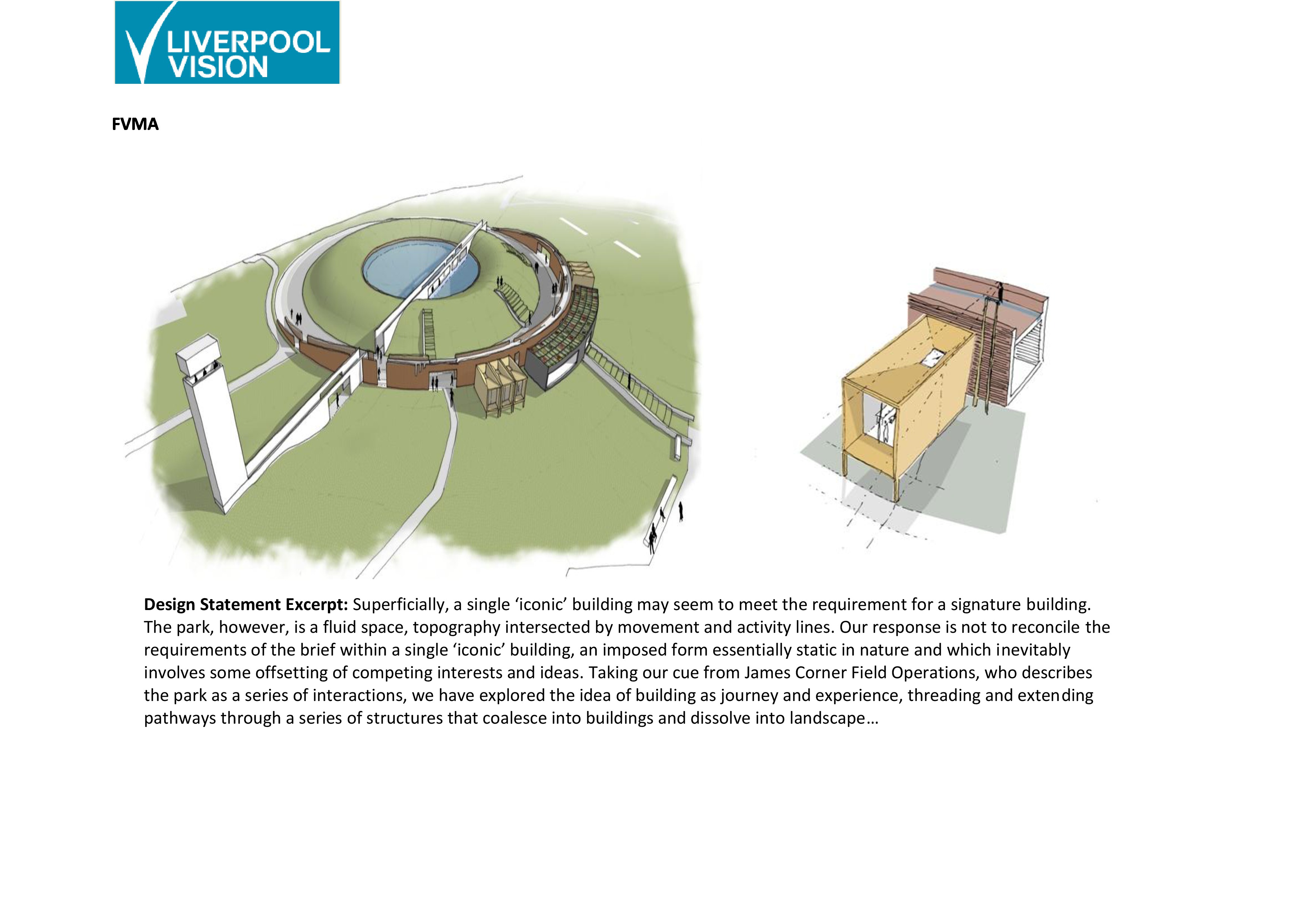 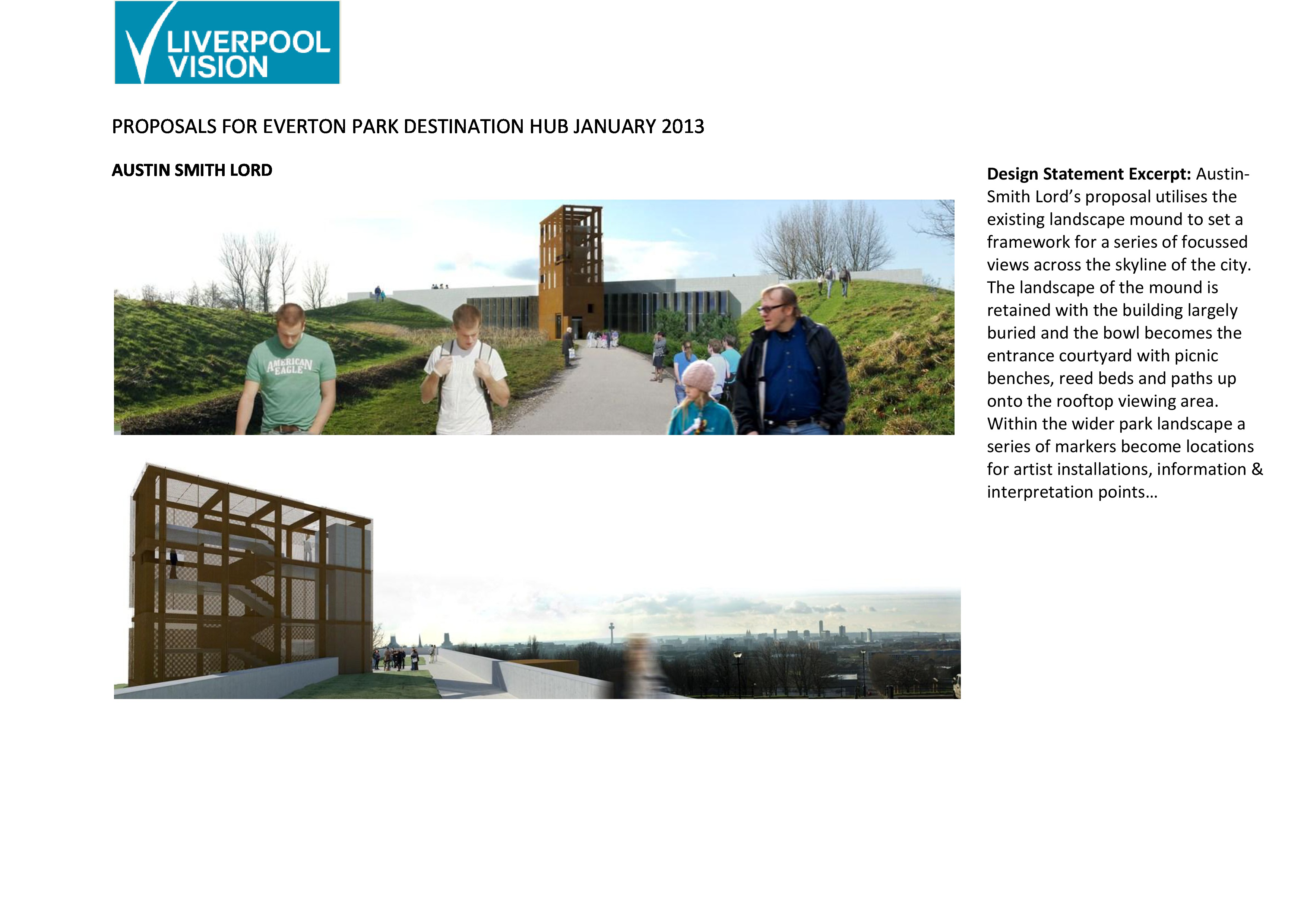 Haeg showed his grasp of the area’s fraught history in an interview in June 2012:

The Seeds of Change

‘Two of America’s most respected landscape artists are heading to Everton this summer.  But not to the hallowed turf of Goodison.  They’re headed to a windblown park at the top of the town…

Fritz Haeg admits: Everton Brow is one of his trickiest commissions.

“It’s a strange place,” Haeg amits, “It’s not like your regular city park, with high density growth at the perimeter, prime real estate around it, and a real sense of purpose.  In fact, I’d say it was the exact opposite of that!”

The site’s dimensions are curious and challenging.  Rising from a hollowed out core, a grassy bank cordons in a featureless bowl.  A drive loops the outer edge, allowing motorists to simply skirt its perimeter, drink in the view from the safety of their car seat, and leave: never once having had the feel of grass underfoot.  A drive thu-park, you could say. Fritz plans on changing all that.

“The history of this park is so fraught,” says the man who, with his Edible Estates project, introduced the idea of people growing vegetables in their front gardens, à la The Good Life, to make the process visible, communal and sociable.  And it’s these qualities he hopes to transplant here, at the top of the city.

“The site was once a vibrant community of narrow little streets, and these neighbourhoods have been uprooted, dispersed and violently wiped from the map.  The park, which we’re renaming Everton People’s Park, is a chance for people to reconnect again.”’

For a comprehensive photo history of the clearances, there’s no better source book than the O’Connor brother’s recently updated classic Liverpool: It all came Tumbling Down. 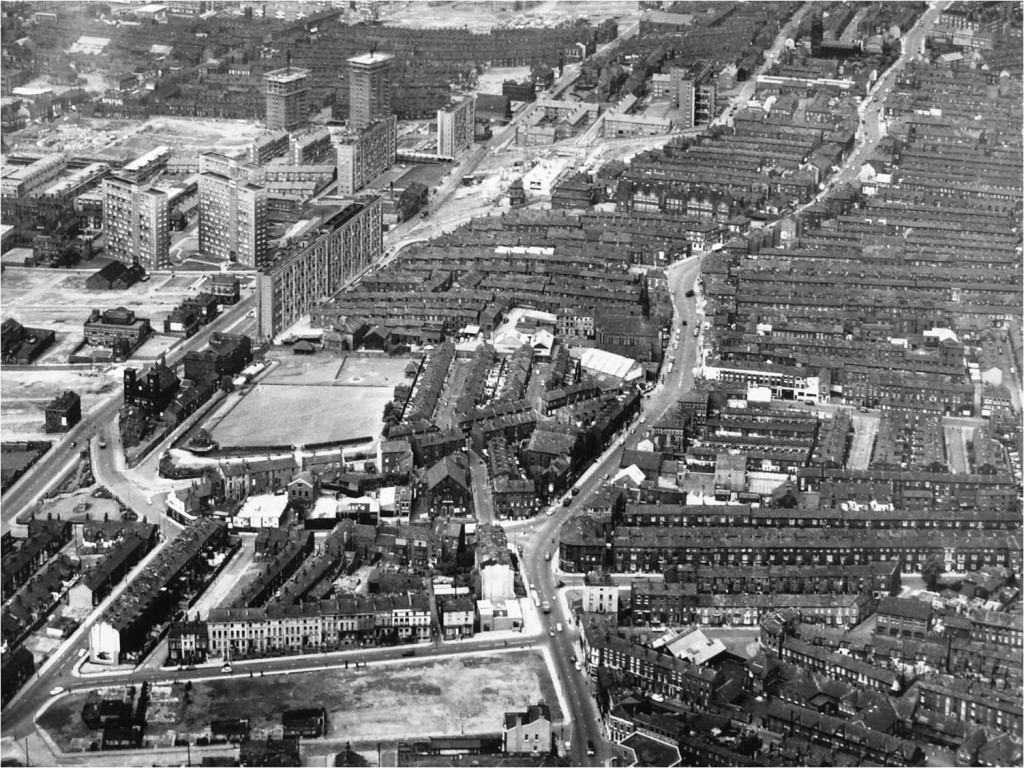 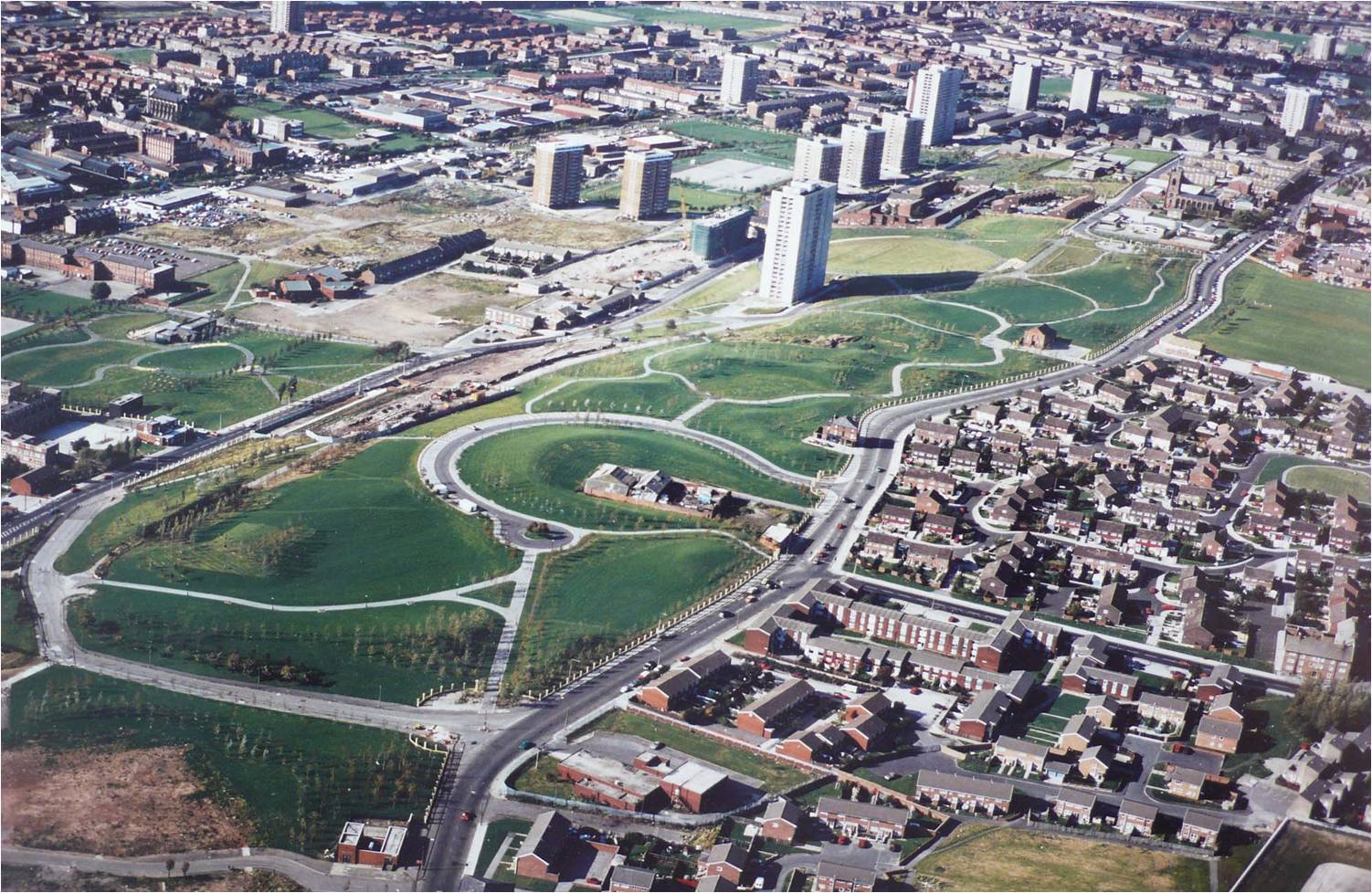 Wiped Off the Map – The city that tore out its own heart. Everton streetmap, c.1960.  In the clearances, the high streets (in yellow) were converted to highways, and almost every side street obliterated, with thousands of houses replaced by 25 towers and maisonettes. The experiment was catastrophic.  The new 1960s & 70s estates were all but abandoned within a decade, and most were demolished and grassed over in the late 1980s to create Everton park.

Disorienteering: The good people of Everton survey their new Jerusalem, c.1970. St. George’s Church is the only building standing today. From the Lost Tribes of Everton, Liverpool Daily Post and Echo

by Peter Taaffe and Tony Mulhearn

Liverpool’s Urban Regeneration Strategy (URS), which was launched in 1984, represented a complete rupture with all previous housing schemes in Liverpool.

Fourteen inner city areas and three on the outer estates were designated as priority areas, with 40,000 people living in over 400 hectares of densely populated land. In an area once full of derelict land and some of the worst housing in the city, a new park, Everton Park, was created. More than 5000 houses were built in the period 1983-7.

The achievements were hailed by housing experts, several of whom disagreed with the political position of the council. The Post(12 September 1985) carried a headline: ‘House-proud city has got it right.’ It went on to state, ‘The city’s 3800 new homes, all with front and back gardens, earn praise from author Alice Coleman… “Liverpool”, she told council chiefs and local builders, has “got it right”.’

Ms Coleman, a housing expert and author of a book, Utopia on Trial, had carried out detailed research into housing conditions. She completely concurred with the main thrust of the URS and of the council’s conviction that the majority of people preferred to live in traditional houses. She went on record saying that she regarded the Liverpool efforts in urban housing as an example of they way the problem should be tackled.

Herdman’s View of Everton 1833. St. George’s Church – The Iron Church – was built in 1815, and was one of the first buildings with a cast-iron frame. It was built on the site of an old ‘beacon’.

Some further reading on the reshaping of inner city Liverpool:

Two excellent new books detail the Lost Tribes of Everton, from the archives of the Liverpool Daily Post and Echo.

As mentioned, there’s no better source book of photos documenting the impact of the clearances than the O’Connor brother’s (recently updated) 1986 classic Liverpool: It all came Tumbling Down.

And delving deeper into history, this is a brilliant website detailing the famous author Thomas De Quincey’s time living in Everton http://dequinceyineverton.blogspot.co.uk/2010/11/everton-in-1800s.html