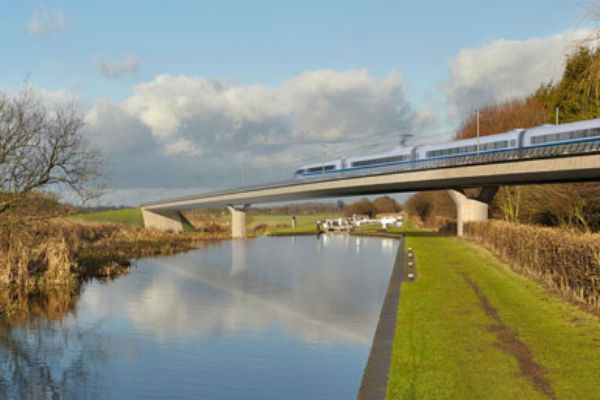 The Birmingham and Fazeley viaduct, part of the proposed route for the HS2 high-speed rail scheme. Photograph: HS2/PA

Communities across the north of England are set to discover on Monday whether high-speed rail will cross their path as plans are unveiled for the second phase of the £33bn HS2 project, with councils and businesses hoping for stations in their cities, while residents fear the effects of construction, blight and noise.

The transport secretary, Patrick McLoughlin, will be joined by the prime minister and cabinet colleagues as he outlines his proposed route for the Y-shaped network north of Birmingham to Manchester and Leeds. Well-placed sources believe the route will include a new spur to Crewe and run via Manchester airport, helping to bolster support in critical areas of the north.

Fresh controversy may be fuelled by deferring the Heathrow link that was one element of HS2’s logic. David Cameron will stress that HS2 is a “vital engine for growth” while McLoughlin will promise that “HS2 will be woven into the transport fabric of the nation, accessible to all”.

Extending the high-speed track to Crewe would mean big savings on journey times between London and Liverpool, where city leaders fear falling further behind Manchester in investment, as well as onward to Scotland. A stop at Manchester airport would help buy off the wealthy Cheshire set with a fast and accessible route to the capital, muting the kind of protests seen across the Chilterns, where residents face the disruption of high-speed rail with none of the benefits.

The other question is where stations will be on the eastern branch. Sheffield, the beneficiary of a promised South Yorkshire stop, may have to make do with a station on the fringes at the Meadowhall shopping centre. That would dismay those hoping it would help revitalise urban Sheffield: they say the transfer time would make the high-speed route slower than the Midland Mainline from London for the city centre. The deputy prime minister, Sheffield Hallam MP Nick Clegg, has described any stop in the vicinity as a “major victory”.

A new “parkway” station in the east Midlands at Toton, on the edge of Nottingham towards Derby, is tipped to be the only other stop on the eastern branch to Leeds, as planners try to balance the demand for the new track to serve multiple cities with the time losses that would blunt the capabilities of high-speed rail.

However, the government is playing down the speed and time savings after a bruising experience selling the benefits of the first phase of HS2 were was derided by opponents as simply shortening the journey times between London and Birmingham. Instead it will stress the need for extra capacity, along with the economic benefits and tens of thousands of jobs that the new infrastructure will bring. 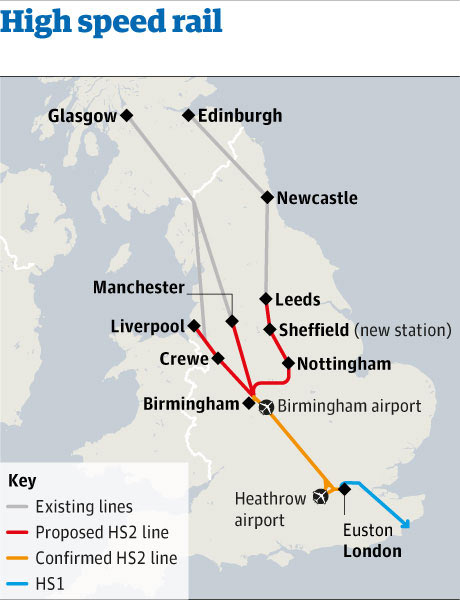 The prime minister will say: “Linking communities and businesses across the country and shrinking the distances between our greatest cities, high-speed rail is an engine for growth that will help to drive regional regeneration and invigorate our regional economies. It is vital we get on board the high-speed revolution.”

He will add: “It is a catalyst that will help to secure economic prosperity across Britain, rebalance our economy and support tens of thousands of jobs.”

A decision on building a high-speed link to Heathrow, originally destined to be part of the phase two announcement, is to be deferred until the Davies commission on aviation capacity has reported after the next election. Although the logic is to present an integrated transport strategy, HS2’s opponents are likely to seize on the U-turn as more evidence that the plans are ill-conceived – and possibly as a basis for further legal challenge.

However, the government has confirmed that HS2 will immediately connect to Crossrail at a new Old Oak Common station in west London, speeding up links to the UK’s main hub airport.

George Osborne, the chancellor, whose Tatton constituency lies on the expected route, is a crucial proponent in unlocking the £33bn spend. A source familiar with his thinking said: “The coalition’s hope is that it will create a mega-city in the north. Osborne’s like a CFO [chief financial officer] looking at his estate – when he looks at his country, he sees that half of it is overheated and the rest is struggling.

“When George goes to Japan, as he likes to do, he sees how the bullet train from Tokyo made Osaka a dramatically different place. And he’s often looked at the fast trains on the southern seaboard of China – and he thinks, if only Leeds, Manchester, Rotherham, Barnsley, Derby could have the same sort of connections – if people who lived there could apply for jobs elsewhere, or potential clients in London could source business from those places.”

Economists are divided on the benefits. Opponents point to studies of existing routes, such as France’s TGV network, that suggest the biggest flow of economic gain would go to London.