So, a massive splash this week on something we’ve pushed for ages – giving away for a £1 tinned up terraces emptied out by the £2.2bn ‘Pathfinder’ demolitions, instead of leaving them to rot.

The national press printed my quotes welcoming the initiative – and urging housing bosses to go much further. 800 people in two days contacted Liverpool Council, desperate to get in and start renovating homes. 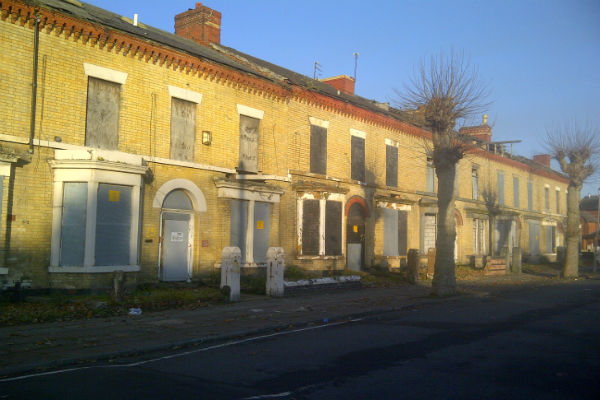 This is the end of the Housing Market Renewal myth of low demand – but only a start to fixing the grotesque damage left behind. 20 houses are a drop in the ocean of 15,000 empty homes in Liverpool.

Liverpool council At present, there are 563 emptied out houses in the 3 areas where the scheme is being tried.  179 will be given away, but mainly to landlords.

And 181 in Smithdown’s Webster Triangle – between Tunstall and Webster St – are still scheduled for demolition – though happily that’s now under review.

The facts at present show just 20 of the 179 homes being sold for £1 will go direct to individuals.

The 203 non LCC houses are mainly Riverside, and other landlords.
You will see in Para 2 they intend the other homes to be taken on by the Strategic Housing Delivery Partner being brought in to replace Leader 1 and Fringe after they were discredited in the press.
Total 382, 179 LCC;
plus 181 in Webster Triangle, 140 LCC
= 563 altogether, 319 LCC
http://councillors.liverpool.gov.uk/documents/s115816/Regenerating%20Granby%20Four%20Streets%20Arnside%20Road%20and%20Webster%20Triangle%20East%20H17.pdf

Just two days after the Echo broke the story, the council had received 800 calls from people wanting to live in the houses and start’ renovations.  There is huge housing need in Liverpool’s inner city.

Ideally, the land banks built up under the ‘Housing Market Renewal Pathfinder’, which cleared 30,000 homes nationwide, can start to be broken up and returned to the ordinary families and small firms who funded the programme.

If justice is really to prevail, first refusal should go to the residents reluctantly evicted and displaced (of course, some were happy to go).

Just for the record, it’s 480 homes in the total Welsh Streets clearance area.
Plus Dane say they will keep 16 on Madryn, 16 on Kelvin Grove, and a few on High Park St. They say 35 will be retained thanks to campaigners.
So 440 to be demolished, 270 in Phases 1 and 2.
Plus Dane are applying for 152 New build, and refurb of 32 they left empty.  Rather spitefully, the 3 not being refurbd are the residents who campaigned against clearance.
with 270 in the area going for detailed planning permission, where 170 will be replaced