My friends at Liverpool University’s Civic Design Department have just published these superb spatial maps, using brand new UK census data.  I’ll be adding a selection with some analysis over the next day or two.

They are the loving work of cartographic guru Dr. Alex Singleton.  Alex has run the data for every local authority in the country – and it’s all available free via his website: www.alex-singleton.com. 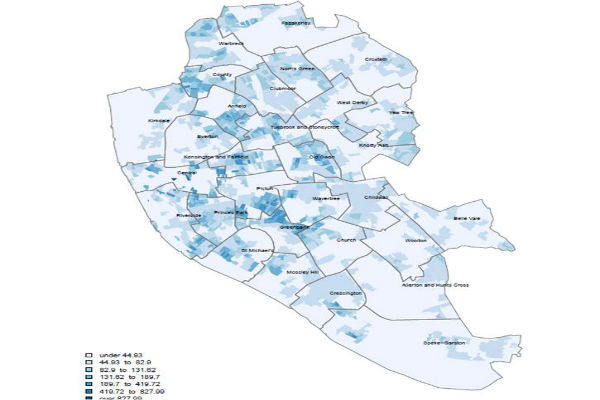 Look more closely and you can see Liverpool’s distinctive radial pattern, with ‘fingers’ of density spanning out from the city centre along County Road, Kensington, Princes Avenue, Smithdown and Park Road/Aigburth Road.

There are a few clusters of high population density quite a distance from the city centre, such as Fazakerley in the far north, and Garston (Cressington ward) in the south end.

There is also stark evidence of 1960s and 70s housing clearance in the large low density gaps in and around the city centre (Central, Riverside, Kirkdale and Everton wards).   During this period some 70% of inner city housing was removed, and 166,000 residents relocated to distant new towns and estates beyond the urban boundary.

If Liverpool is to sustain its new population growth (up 6% since 2001 – the first rise in 80 years, and the largest since the 19th century), these inner city areas, and the former dockland waterfront, are the gaps waiting to be refilled.

Good to see Alex getting some kudos for his work – this from Guardian online, February 8th 2013: http://www.guardian.co.uk/news/datablog/2013/feb/08/census-data-mapped